When Was It Released?: 1st September
Where Did I Get It From?: Liz from Choc Lit was kind enough to send a copy in exchange for a review
Who Published It?: Choc Lit
Number Of Pages:  301 Pages


While never having read any of Jane Lovering’s previous novels, I had seen a large amount of other great reviews for Star Struck. I knew that if all of my friends and fellow chick lit bloggers were enjoying the novel it was highly likely that I would too. Therefore I was excited to read the novel and form my own opinions. 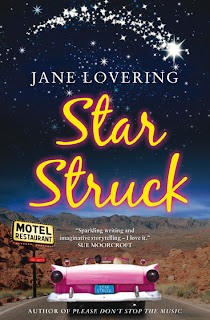 Skye is a recluse, scared to be away from her daily routine, not even wanting to leave the house. Why? Well Skye was in a car accident that left her with scars on the inside and out. The car accident also took her memories as well as her best friend and fiancé. When offered a trip to Nevada for a sci-fi convention, Skye hopes that this will be the trip that will help her to heal. Skye wants to go in order to meet the actor she idolises, Gethryn Tudor-Morgan, but she ends up bumping into Jack first. Jack is a sci-fi writer with lots of secrets in his past. With all his problems Jack is not looking for a woman he has enough problems without adding a relationship to the mix. Even so Jack seems drawn to Skye and cannot help the friendship that develops between them. Jack, however, fears that if Skye finds out about his past, they will never have a chance at a future.

I have to admit that before I picked up this book, I was a little put off by the concept of Skye heading to a sci-fi convention for Falling Skies. I felt that it would become too much like a sci-fi novel or else I would be bored by the novel being focuses around this. That was so far from the truth! The way in which Jane Lovering adds the concept of the sci-fi convention actually makes the novel unique and provides a setting that I have never seen in a chick lit novel before. Jane’s writing style also made this aspect entertaining and humorous, whereas it could have become nerdy! The pace from the first chapter was fast and meant that I was instantly swept away with the novel. Almost as soon as I was done with the first few pages I knew that my initial worries were not needed. While I do not want to give anything away about the book; there is a lot of drama that I did not in any way see coming around the middle of the novel onwards. I love it when a novel surprises me with twists and turns that shock me and I had no hint that they were coming.

I really enjoyed reading about the characters within Star Struck, in particular Skye, Felix and Jack, due to them being so flawed. The imperfections made each of the characters extremely interesting and added a large amount of depth and layers to each character. I felt that this made each character seem more realistic, as most people have their flaws. While at times I did not like all of the characters, in particular Felix, who treats Skye in ways that made me doubt his friendship at times, I found myself wanting to find out more about them. All of the characters have secrets and I was riveted throughout, wondering what each of their secrets could be. Even though I have never been in the same situations as any of the characters I found myself relating to all of them especially Skye. I was routing for Skye throughout the novel to gain more confidence and realise what she is really capable of.

I did find however that even though some aspects of the novel surprised me, others such as the romance elements did not. Again I do not want to give too much away if you have not read this novel, however it is extremely easy to see exactly how the relationships in the novel will pan out. I would have liked there to be a little more mystery surrounded what would happen in terms of the relationships in order to make the storyline a little more interesting. Additionally, while I actually enjoyed the novel being set at a sci-fi convention, I feel as though this concept will put some readers off. All I can say about this is, please don’t let it.

Overall, after putting aside my initial worry over this novel, I really found this an enjoyable novel. I was gripped from the first page onwards, finding myself not wanting to put Star Struck down. It was fast paced, emotional, entertaining and I did not want this novel to end. I cannot wait to read more from Jane Lovering, and will defiantly be picking up Please Don’t Stop The Music, her previous novel with publishers Choc Lit, in order to read more from this sensational author. Go out and buy this one, you won’t regret it!