When Was It Released?: July 5th 2011
Where Did I Get It From?: I won this from the lovely ladies at Chick Lit Central.
Who Published It?:  New American Library

I received this book from the lovely ladies at Chick Lit Central. Stephanie Stiles' debut chick lit novel Take It Like A Mom, looks at the hard job mother's face raising a baby and the validation that they don't always receieve for their hard work. Even though from the outset this looks like a self help book, do not be fooled. It is a humorous take on motherhood and the perils that come with it. 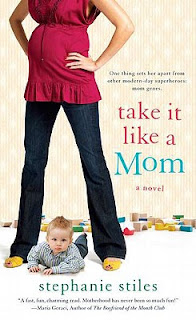 Annie Fingart Foster is a stay at home mom to three year old toddler Robby, after giving up her job as a high flying professional lawyer. Being at home with Robby means she has given up the luxuries not only of fashionable dry clean only clothes but even of washing her hair on a regular basis. This novel takes us throw the rapid of motherhood, including to Annie's surpise and perhaps horror, of finding out that she is expecting baby number two. Annie thinks she knows what to expect, after all she has been through it all before, except this time her husband Alex has lost his job. As if that is not enough to deal with Annie also has to contend with are plenty of preschool politics, over zealous parents in the playground and an ever expanding waistline, leading her to believe she must be having a 40 pound baby. Annie thinks that her life of stay at home motherhood is turning into a tv sitcom, if only she had the magic powers of her beloved characters in Bewitched. Alas she does not, so it seems that Annie will just have to suck it up and take it like a mom.

Even though I am not a mother, I know that many mom's will be able to relate to this book due to Ms Stile's witty and scathingly real description of motherhood. There is no glossing over of the demands that motherhood places on a woman and I liked the realness of this. I loved the character of Annie, not only was she laugh out loud funny with her mishaps, jokes and general humour but she also has a good heart, which leads her to taking care of people whom in some cases she does not even know, including believe it or not her cable guy. Even though this is a story of motherhood the narration always stays upbeat, with the character of Annie sucking up the situation and just getting on with life.

There are many characters you will hate in this book, including Lippie the Hippie and Cathy Crew Cut and many you will also grow to love along the way, especially Annie's two best friends, Jenn and Jen. 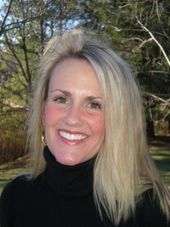 I loved the humour in Ms Stiles narration, with her many references to pop culture and tv sitcoms, which had me literally laughing out loud more times than I can remember. The references, however did get a bit too much towards the end of the book, where I began to wish they were not used quite so much. Some readers may find it takes a little while to get into the humour of this book but it is definatly worth sticking around for.

Overall I loved this book. It is hilarious, entertaining, and a page turning look at mom lit. Take It Like Mom is a great beach read for the last of our summer months being light enough to get through in one sitting alone. Even though this book is focused on motherhood, you do not need to be a mom to enjoy this. A book I would recommend to anyone.