Hi Georgina! Thank you for this opportunity for interview and the fabulous give-away competition. I will be really excited to see your readers' enteries. Now let's take a look at the questions......

1. What was your inspiration for Sophie's Turn?

I was watching a movie one night featuring on of my all-time favourite film stars. I don’t recall exactly who it was (Mel Gibson? Pierce Brosnan?) but I muttered something along the lines of “hmmmm….if he ever proposed, how would a girl turn him down!” My husband pretended to be offended… And there was the crux, the conundrum, the “what if” at the centre of Sophie’s Turn. It came back to haunt me in the middle of the night, and I just had to go and write it down. Then I started spinning a rudimentary tale around it… and the story evolved from there.

2. Why did you decide to self-publish Sophie’s Turn?

Self-publishing is a great avenue for independent authors to get their work ‘out there’ and noticed. It gives you full control over when you publish, where you publish and at what price. It lets me market and publicise Sophie’s Turn in every which way I see fit. What’s not to like?

3. Would you ever turn Sophie’s Turn into a paperback novel or will it always be an e-book?

I would love to publish Sophie’s Turn as a paperback novel. Quite a few people have asked me for paper copies, and I can understand why. However, at this time, the cost involved in making a paper copy and shipping it anywhere but the US is so high that it is not an attractive proposition. I will revisit this issue in the future and you never know…! I’ll keep you posted!

4. Were any elements of Sophie’s Turn based on your own life experiences?

Ah… I wish! I might have hung around a dressing room or three in my time but sadly—no! Sophie’s experiences are all just one big fantasy, mostly! J 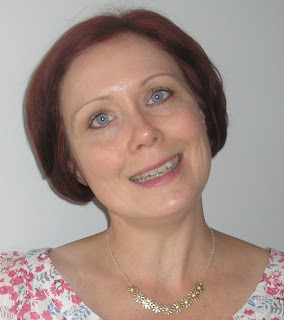 But answering your question more broadly… Obviously, Sophie’s Turn is a work of fiction and none of the characters or events in it are real. But how do I, how does any writer, come up with ideas? For me, the answer is that I draw very loosely on things that have happened to me, stories I’ve heard from friends, read in the paper or seen on TV. The process of turning these ‘nuggets’ into a story is not a straightforward one. I never take the real facts or names for my work, but I might draw on the essence, the ‘idea.’ Very often, several ideas come together to make on episode. For example, the ‘de-slugging’ incident that you enjoyed so much came about like this: I know of someone who collects old miner’s hats for a reason that I can’t quite comprehend (that’s one idea strand). My husband gets really annoyed by slugs eating our vegetables all the time (there’s another idea). Slugs always seem to come out in the rain (fact, and another idea). Tim needed to do something really weird (that was a plot requirement). Throw these things in together and mix well…


5. With the band Tusk playing an important role throughout the novel, did you go to many gigs or speak with any bands during the writing of the novel?

I go to rock gigs wherever I can get to them—which is not as often as I’d like! I have met a few bands over the years and yes, that helped in writing Sophie’s Turn. But I was quite heavily pregnant while I was writing Sophie’s Turn so I didn’t go to many gigs at that time. The one band I did see then was The Darkness during their Christmas Tour in 2004. They put on one of the best shows I’ve ever seen and they made fantastic live music. I hasten to add that I wasn’t moshing in the front row! In deference to my being five months pregnant, we had booked seats right at the top of the arena. Unfortunately, baby-in-tummy wasn’t too impressed by the noise and vibration even though I wasn’t even dancing! At one point I had to leave and get some quiet time because I thought baby would ‘evacuate’ right there and then.

6. If you were in Sophie’s shoes, do you think you would have made the same decisions that she did?

Hmmm…. I was placing myself in Sophie’s shoes pretty much all through writing the novel, but I found she did quite a few things I wouldn’t have done. For example, I don’t think I would have had the courage to accompany Dan to the Royal, let alone his suite. I was glad about the decisions she made at the very end although I personally might have been inclined to do things slightly differently. I don’t want to give too much away here for folks who haven’t read Sophie’s Turn yet!

7. If Sophie’s Turn were to be made into a movie, what would be your dream cast?

8. In Sophie’s Turn, Sophie gets to travel all over Europe. Where is your favourite place to travel to?

I love going down to Cornwall and Devon because it is so unbelievably pretty and wild down there. In fact, I do need some seaside exposure every now and then just to get things in perspective! In terms of Sophie-style travelling, my favourite place to travel has to be Berlin. It is an amazing, vibrant city with lots to do, big open spaces, lots of water ways (amazing, given that it’s completely landlocked!) and it’s full of exciting, slightly eccentric people.

9. What books are you reading right now?

I just finished reading “Extra Virgin” by Annie Hawes. She describes her experiences of settling down as a somewhat exotic ‘foreign’ (English) creature (and female, and single at that!) in 1970s Liguria in Italy. It’s a fantastic, sun-drenched holiday read and always puts me in the mood for yummy Italian cooking. Now I’ve started on “Sowing Secrets” by Trisha Ashley. It’s the first book of hers that I’m reading and I haven’t got very far yet so I won’t comment for now…

10. Do you have any plans for a second book?

Of course! Sophie’s story isn’t finished, and I’m planning the sequel right now. Sophie and Dan will feature (obviously), as will Rachel. Rachel will have a much bigger, very important role to play… and she might not always like it! I hope to finish it inside a year, allowing for ‘resting’ time, editing, rewriting, proofing and publishing. Watch this space!

Thank you Georgina for these interesting questions, and good luck to everybody entering the give-away! XX 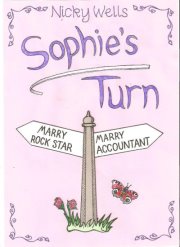 Following my review of Nicky Wells' novel, Sophie's Turn, (Check out the review here ), earlier this month, I am delighted to announce a give-away of an e-copy of Sophie's Turn. This give-away is part of the Virtual Book Tour of debut novelist Nicky Wells’ novel Sophie’s Turn (Check out Nicky here )

Sophie’s Turn is a charming, honest and romantic take on chick lit. The novel focuses on one women's entaglement with a rock star .... and who wouldn't want to marry their favourite star given the chance? If you love chick lit, you will adore this novel. Make sure you don’t miss out on this opportunity to win a copy of this e-book.

Nicky has kindly provided one e-copy of Sophie’s Turn for one of my lucky readers. The lucky winner will get a free e-copy on their Kindle, or their Kindle Reading app for iPad, PC, Mac, iPhone or Android (Kindle Reading Apps are FREE to download from here ).

For the opportunity to win an e-copy of Nicky Well’s Sophie’s Turn, please leave me a comment telling me why you absoutely should win this novel. You must include your email address where you can be reached along with the comment.

This giveaway is open internationally.