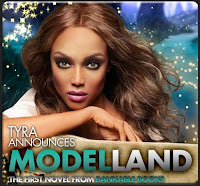 Tyra Banks, model and presenter of America's Next Top Model has turned her hand to writing with the release of her debut novel "Modelland". This is set to be the first of a series of three young adult fantasy series books. "Modelland is set to be released in Septemeber and I will definatly be getting my copy as soon as it hits the shelves. Want to know more? :

No one gets in without being asked. And with her untamable hair, large forehead, and gawky body, Tookie De La Creme isn't expecting an invitation. Modelland - the exclusive, mysterious place on top of the mountain - never dares to make an appearance in her dreams. But someone has plans for Tookie. Before she can blink her mismatched eyes, Tookie finds herself in the very place every girl in the world obsesses about. And three unlikely girls have joined her. Only seven extraordinary young women become Intoxibellas each year. Famous. Worshipped. Magical. What happens to those who don't make it? Well, no one really speaks of that. Some things are better left unsaid. Thrown into a world where she doesn't seem to belong, Tookie glimpses a future that could be hers - if she survives the beastly Catwalk Corridor and terrifying Thigh-High Boot Camp. Or could it? Dark rumours like silken threads swirl around the question of why Tookie and her new friends were selected . . . and the shadows around Modelland hide sinister secrets

The beautiful Tess Daly, British presenter of Strictly Come Dancing (The UK's version of Dancing With The Stars) has written her debut fiction novel "The Camera Never Lies." Her previous non-fiction is untitled the Baby Diaries, taking a look at motherhood. "The Camera Never Lies" is set to be released in October and I can't wait to get my hands on this. To get you excited about the novel here is the synopsis:

Britt Baxter is unaware of the effect she has on people. A big-hearted, no-nonsense northern girl, she naturally looks for the best in everyone she meets, but in her attempts to make it as model she finds she struggles against being pinned down on the casting couch by the most unlikely people... So when a happy accident lands her a career as a presenter on breakfast television, it looks as if she has made it out of the modelling world of close-ups and cattle calls and into the big time - or at least daytime TV. But scarcely has Britt had time to wonder at how far she has come, when backstage machinations propel her with ever increasing speed through a series of trapdoors and she soon realises that the drama backstage far eclipses anything that happens in front of the camera.