When Was It Released?: 11th April 2011
Where Did I Get It From?: I received this as part of the blog tour for Westmore from Tiffany at A Cozy Reader's Corner Review
Who Published It?: Create Space
Number Of Pages: 390 pages


Family drama, romance and a picture perfect New England town; what more could you want in a novel? Well Westmore offers all this and much more. I was first introduced to Westmore by Tiffany over at A Cozy Reader‘s Corner Review . She is running a blog tour of Westmore and after becoming intrigued by the novel I decided to sign up. 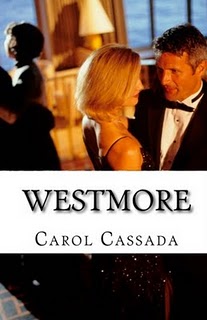 Westmore follows the lives of three families; The Greens, The Braxton’s and The Reynolds. Charlotte is a widowed single mother, who never believed she could find love after the death of her husband. That is until Detective Bryant comes onto the scene. Andrew Braxton is a ruthless successful businessman who runs his household with an iron fist. As soon as he learns his youngest son Wayne plans to move away and work for another publishing company he goes out of his way to do everything he can to stop his son from leaving. Laura Reynolds is having marital problems and so decides to move back home with her daughter Megan. Little does she know that she may be running from the past but her past could be about to catch up with her.

The style in which Carol Cassada wrote Westmore was very enjoyable. I found style and storyline is a little reminiscent of Danielle Steel’s novels. The storyline held a large amount of promise being filled with romance, family drama and family issues. The characters are engaging and I found that there were characters I fell in love with. Charlotte in particular was one of my favourite characters throughout the novel. I found Charlotte to be very relatable and I was moved by the problems she has gone through in her life. I felt the emotions she was feeling and found that I was routing for her to overcome the issues and find happiness. I also found that the character of Andrew was enjoyable to read about. Even though I did not like him as a character, in fact at times I found myself hating him, I enjoyed the way in which he brought drama into the novel. I also loved the way in which Westmore ends on a cliff hanger, leaving the reader in suspense. This made me want to read the next instalment to discover exactly how the story plays out.

I did find, however, that far too many characters were introduced in a short space of time. At the beginning of the novel numerous characters are introduced for about a page each. You do not really get to know much about the characters before you learn about new ones. I found that this meant I forgot who characters were and became confused about how the characters were intertwined with each other. I usually enjoy novels with numerous characters but in the case of Westmore I think they should have been introduced as the novel progresses rather than just all in the beginning. I also thought that very little seemed to actually happen within the novel until the very end when I was left with a cliff hanger. I would have liked to see more drama in the middle of the novel in order to power the novel forward. In addition I found that there were a large number of errors; both spelling and grammatical. This may, however be due to the fact that I was send a novel for review, therefore it may not be the finished manuscript.

I have to admit that I found Westmore was not a novel that I enjoyed as much as I thought I would. I found that my tastes were slightly different to this novel. I would defiantly recommend anyone to read this novel for themselves and form your own opinions. I have read many good reviews on Westmore, however I just found that it was not to my tastes. Please remember that my reviews are only my opinion, therefore you may find yourself completely disagreeing with what I say. Having said that, I am defiantly looking forward to reading volume two of Westmore and finding out exactly how the story progresses.