Wrapped Up In You by Carole Matthews: A Review

Wrapped Up In You by Carole Matthews 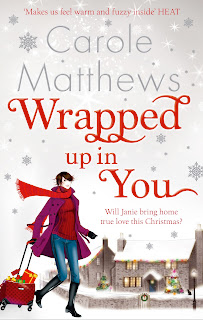 Where Did I Get It From?: From publisher in exchange for a review. Thankyou!
Who Published It?: Sphere
Number Of Pages: 440 pages

When the winter months descend on us, the cold weather draws in and the days get darker and darker there is one thing that I look forward to, and that is curling up with a cup of hot chocolate and an inviting Christmas novel. With an abudance of Christmas related novels released each year I always have to try to be selective in which ones I read and Carole Matthews' Wrapped Up In You was one that I just could not pass up. The cover is so gorgeous with the snowflakes and sparkle that I had a hard time not reading this one back in October when it was released.

Janie Johnson, a thirty year old, hairdresser is single and happy that way. All her friends and clients, however think its high time she found herself a man. After a disastrous blind date and finding out that her ex is getting married she realises she needs a change. Janie does the most adventurous thing that she can think of and books a safari trip to Africa. Everyone thinks that she has gone crazy but then while in Africa Janie falls in love with her tour guide, a Massai Warrior named Dominic. With Dominic in exotic Africa and Janie in wintery England how will they keep their relationship alive?

I loved the premise and idea behind Wrapped Up In You. The unique way in which Carole Matthews took on a holiday romance was really enjoyable. What I loved most though was the way in which Carole Matthews took on the often overlooked subject in chick lit of interacial relationships and the issues that are faced within them. Thinking back I seem unable to recall any chick lit novels that focus around interacial relationships in this way (although I may be wrong, my memory does tend to fail me sometimes.) The prejudices and criticisms focused on where so realistic and centered around how many couples still face these problems in society. With the book being set in Africa, I also felt this added a unique element to the story, very few books are set in this destinations. The descriptions were so well done that at times I could almost feel as though I was on safari with Janie. While Carole Matthews focuses on this serious issue, Wrapped Up In You is still a lighthearted, fun read, which I really liked. The humour within Wrapped Up In You had me laughing out loud on more than one occasion. 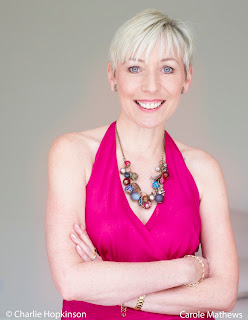 Janie's character was extremely likeable and while she had her insecurities and flaws, she was still a fun and interesting person to read about. I enjoyed the way in which her character evolved along with the story becoming more confident and sure of herself. Even though Janie was a little vunerable and naive I was still routing for her to find love and have her happy ending throughout. I loved Janie's cat, Archie too, he was such a hilarious animal, and his interactions with Dominic were interesting to read about. My favourite character, however had to be Dominic. He was such a quirky, refreshing, addition to the story. I was enthralled with the way in which he has to adapt to life in England and the different cultures from what he was used to in Africa. While, I did not like the way in which Janie's friends treat Dominic, I did feel that it was a true representation of how there are still prejudices in today's soceity of interacial relationships.

Email ThisBlogThis!Share to TwitterShare to FacebookShare to Pinterest
Labels: africa, carole matthews, christmas, review, wrapped up in you